The Holy Prophet Haggai was the tenth of the Twelve Minor Prophets. He was of the Tribe of Levi and he prophesied during the times of the Persian emperor Darius Hystaspis (prior to 500 B.C.). Upon the return of the Jews from the Babylonian Captivity, he persuaded the people to build the Second Temple at Jerusalem, and he proclaimed that the Messiah would appear in this Temple in the last times.

It is believed that Haggai was buried with the priests at Jerusalem, since he was descended from Aaron. - oca.org.

Troparion — Tone 2
We celebrate the memory / of Your prophet Haggai, O Lord; / through him we beseech You: / save our souls.

Kontakion — Tone 4
Podoben: “Today You have shown forth...” / Illumined by the Spirit, your heart was a vessel of illustrious prophecy, / seeing far-off things as though they were present. / Therefore, we venerate you, glorious prophet Haggai. 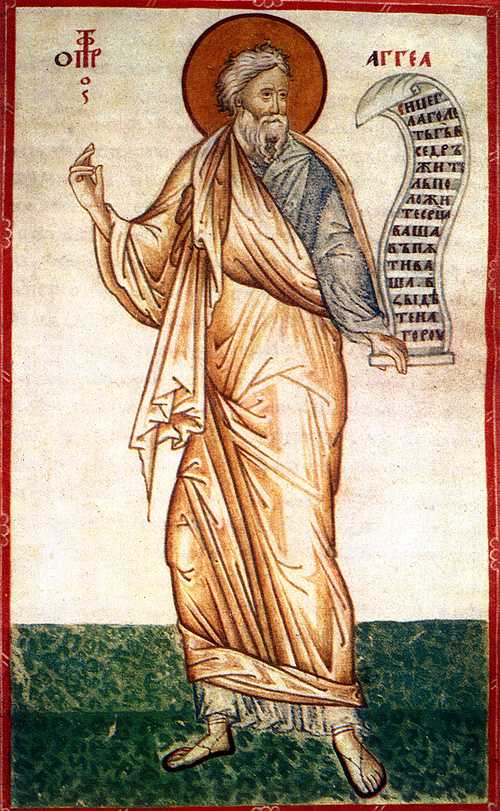 The Holy Martyrs Thyrsus, Leucius and Callinicus suffered for Christ under the emperor Decius (249-251) at Caesarea in Bithynia. Saint Leucius, having reproached the prefect Cumbricius for his unjust persecution of Christians, was executed after being tortured.

Saint Thyrsus, who was still a catechumen, was nonetheless eager for martyrdom. He was sentenced to cruel tortures and torments after refusing to offer sacrifice to the idols. Citing the words of the Prophet Jeremiah (Jer. 2:27), he ridiculed those who worshiped wood and stone.

The saint’s arms and legs were pulled out of their sockets, his eyes were plucked out, and his teeth were shattered with a hammer. He was taken to a heathen temple, where, by his prayers, he toppled a statue of Apollo. Cumbricius was enraged by this, and he ordered that greater torments be devised for the athlete of Christ. He endured them all and died peacefully after making the Sign of the Cross. The pagan priest Callinicus, seeing the bravery and the miracle involving Saint Thyrsus, believed in Christ and boldly confessed the true Faith, for which he was beheaded. - oca.org

Troparion — Tone 3
With garlands and songs let us adorn the seven martyrs, / Thyrsus, Philemon, and steadfast Apolonius, / Arianus, Callinicus, Apollonia and glorious Leucius, / For they destroyed the enemy and are pillars of godliness. / Together they shine on all the world with rays of heavenly grace!

Kontakion — Tone 4
Let us gather today, / And praise the Church’s luminaries, / Acclaiming them as fitting trophy-bearers of Christ our God! 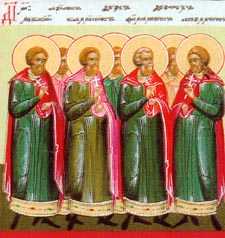 Prophetess Hannah the mother of the Prophet Samuel

The Holy Prophetess Hannah dwelt in marriage with Elkanah, but she was childless. Elkanah took to himself another wife, Phennena, who bore him children. Hannah grieved strongly over her misfortune, and every day she prayed for an end to her barrenness, and vowed to dedicate her child to God.

Once, as she prayed fervently in the Temple, the priest Heli thought that she was drunk, and he began to reproach her. But the saint poured out her grief, and after she received a blessing, she returned home. After this Hannah conceived and gave birth to a son, whom she named Samuel (which means “Asked from God”).

When the child reached the age of boyhood, the mother herself presented him to the priest Heli, and Samuel remained with him to serve before the Tabernacle (1 Kings/1 Samuel 2: 1-21). - oca.org 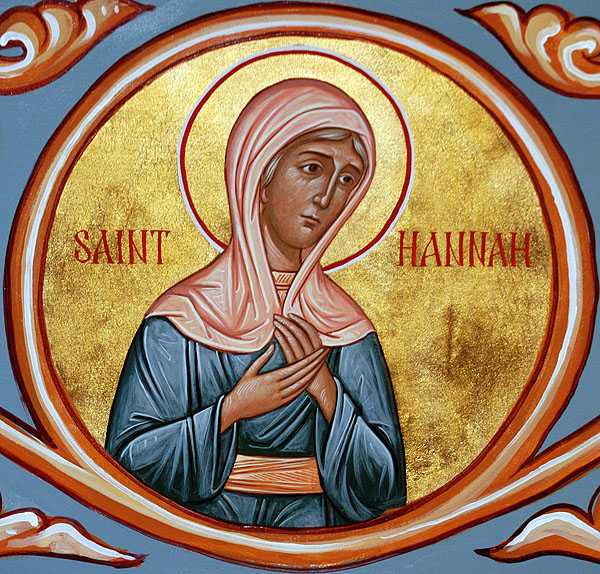 Saint Patapius was born at Thebes into a pious Christian family. Reaching the age of maturity, he scorned the vanities of the world and so went into the Egyptian desert where he became known for his ascetic deeds. Though he wished to dwell in silence, people began to come to him for advice.

He went eventually to Constantinople, where he obtained a cell at the city wall, near the Blachernae church. But here, too, he quickly became known. The sick began to throng about, and he having been vouchsafed the gift of healing, began to help all the needy.

After a life adorned with virtue and miracles, Saint Patapius fell asleep in the Lord and was buried in the church of Saint John the Baptist. - oca.org

Troparion — Tone 8
The image of God was truly preserved in you, O Father, / for you took up the Cross and followed Christ. / By so doing you taught us to disregard the flesh for it passes away / but to care instead for the soul, since it is immortal. / Therefore your spirit, venerable Patapius, rejoices with the angels.

Kontakion — Tone 3
Your temple is found to be a source of healing, / and the people flock to it eagerly, O saint. / They seek the healing of their diseases / and the forgiveness of their sins, / for you are a protector for all those in need, venerable Patapius. 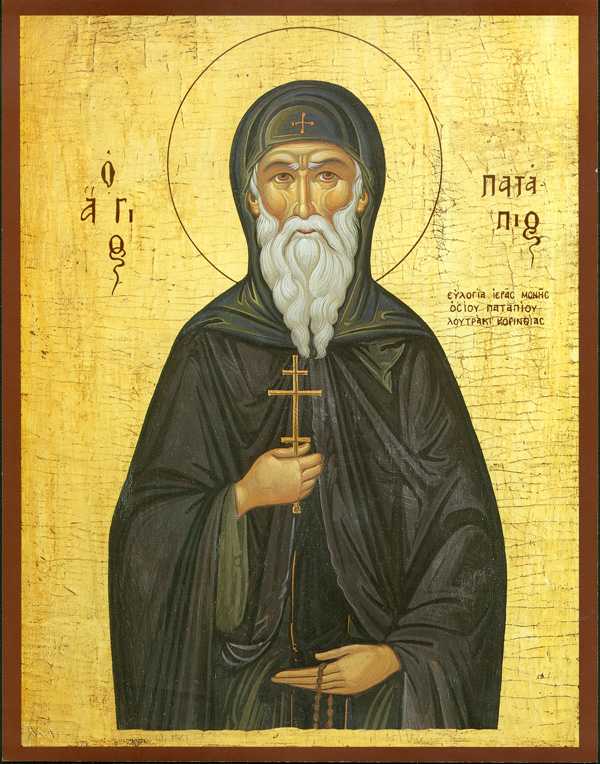 The Holy Prophet Habakkuk, the eighth of the Twelve Minor Prophets, was descended from the Tribe of Simeon, and he prophesied around 650 B.C.

The Prophet Habakkuk foresaw the destruction of the Jerusalem Temple, the Babylonian Captivity and the later return of the captives to their native land. During the war with the Babylonians the prophet withdrew to Arabia, where the following miracle occurred. When he was bringing dinner to the reapers, he met an angel of the Lord, and instantly by the strength of his spirit he was transported to Babylon, where at the time the Prophet Daniel was languishing in prison. The food intended for the reapers assuaged the hunger of the exhausted Prophet Daniel (Dan. 14:33-37).

After the end of the war with the Babylonians, the Prophet Habakkuk returned to his homeland and died at a great old age. His relics were found at the time of Emperor Theodosius the Younger (408-45, together with the relics of the Prophet Micah (August 14).

Troparion — Tone 2
We celebrate the memory / of Your prophet Habakkuk, O Lord; / through him we beseech You: / “Save our souls.”

Kontakion — Tone 8
Divinely eloquent Habakkuk, / you announced to the world the coming forth of God from the south, from the Virgin. / Standing on the divine watch, you received a report from the radiant angel: / “You proclaimed the Resurrection of Christ to the world!” / Therefore in gladness we cry out to you: / “Rejoice, splendid adornment of the prophets!”

Lives of holy men and woman honored by the Church for their faithfulness to Christ. May their memory be eternal.

Rate Saint of the Day