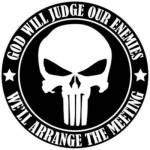 Spokane Gun Trader has given me permission to promote their forum for ALL gun traders nationwide. It's a great place to buy, sell, trade, and barter guns and ammo. Thanks to them, I was able to sell 500 rounds of 28 gauge shotgun ammo I misordered OVERNIGHT. That's right, I had accidentally ordered the wrong caliber of shotgun shells and was worried I wouldn't be able to get rid of them locally because most people around here use 12 gauge. I got 100% of my money back and helped a local pro-gunner find the ammo he needed in the process and it happened with 24 hours of posting it on Spokane Gun Trader.

Just click on the link below to register. Once you have signed-up you will need to confirm your submission by clicking on the link that will be sent to your inbox:
https://www.spokaneguntrader.c....om/ucp.php?mode=regi

If George Washington would have been stacking bodies by now, then why in the hell haven't We the People shot many of the thousands of enemies who are overthrowing our state and federal governments to ultimately murder millions of Americans?!

Dear Fellow Christians and Patriots. My name is Sean David Watson. On December 19th our President called on his supporters to rally in Washington D.C. on January 06, 2021 to protest the stolen election. Being an Army veteran I took this as a direct order from the President. Immediately I booked a hotel and flight to D.C. I arrived in D.C. the night of the 4th and attended the Stop The Steal rally on the 5th. Afterwards hundreds of us marched to Black Lives Matter Plaza (formerly known as Lafayette Square) to protest against BLM and Antifa. I was arrested during the protest for crossing a police line. But that's not my reason for fundraising. The next day hundreds of thousands, if not one million went to the President's rally. Towards the end of President Trump's speech, we Patriots marched towards the Capitol. By the time we arrived at the Capitol the grounds were open and people were massing up against the Capitol. The Capitol police threw flash bangs and tear gas grenades into the crowd followed by pepper spray and attacks with batons. Do not believe the narrative you are being told by the media. We patriots were not violent and did not destroy anything in the Capitol, we were attacked by the police. Perhaps there were some Antifa agitators masking as Trump supporters; however, they were the minority. We peacefully marched and chanted and sang the National Anthem while in the Capitol. When our President told us to stand down we all left the Capitol. My reason for fundraising is that now I am under FBI investigation, I had one interview with them on the 20th of January, and on February 4th my house was raided during a search warrant. I was held at gunpoint and cuffed in front of my house in full view of my neighbors and onlookers driving by. This experience was very traumatizing, humiliating and embarrassing. These actions by the FBI are something you would expect towards a violent criminal, not towards someone who merely attended a protest. Charges have not been brought yet but I am expecting to be arrested soon; I also fear that I may lose my job. From what I understand most of the capitol protestors are being given felony charges. Living in a small rural town in West Texas lawyers are few and far between and I don't know how I will defend myself. As a fellow Patriot and Veteran I am asking God and my fellow Patriots to help me with my defense. If charges are brought against me any money raised in excess of expenses related to my defense will be donated to various Christian charities. Thank you and God Bless you all. Show your support by going to this link http://givesendgo.com/seanwatson

This group is a place to share and sell guns and ammo. It is NOT just another place to post random links as some of you do. Post anything unrelated to guns and ammo and you will be blocked from the group!